If you haven’t had biryani rice, then you are missing out. There are so biryani recipes out there, but this Pakistani chicken biryani recipe is the one for me.

The first time I made homemade Sindhi chicken biryani masala instead of using a store-bought masala was in Ramadan. I had absolutely no clue how to make chicken biryani without the packet and I looked up a lot of recipes to finally come up with my own. When I finally did make it my sister and mother liked it, but my brothers not so much. My brothers claimed it was really bland and didn’t have any flavour. I decided that the next time I would have to adjust the ingredients accordingly in the hope that the biryani would have more flavour. And it worked! I actually prefer this chicken biryani recipe to restaurant style chicken biryani as I always find the Indian rice in restaurants quite hard.

Another tip I have is to wash the rice really thoroughly and be sure to soak it. I know some people don’t do that, but I have noticed a significant difference when I have been too lazy to soak the rice or have forgot to. When you wash the rice, it helps to remove the starch. Depending on the rice you use you might need to wash more or less as some rice is not as starchy as others. Soaking the rice is important because the rice absorbs the water to give a fluffier texture. Again, the length of time of the soaking depends on the type of rice used as some will need to be soaked for longer. Be careful not to oversoak the rice as that is a thing.

So, this might sound strange to you now, but the way I make this chicken dum biryani recipe is by putting it in the oven. It’s something that I have learnt from my mother. You can just cover it with a lid and allow it to steam on top as I have written in the recipe, but I find putting in the oven actually helps a lot and makes the rice absorb all the flavours and the chicken becomes really tender and moist. You can do it without putting it in the oven and it will still taste delicious, but I really do recommend you put it in the oven for the best chicken biryani. I usually put it in the oven for half an hour at gas mark 8 and the rice becomes really soft and absorbs all the flavours from the chicken masala. Trust me, try it. If you don’t have an oven you can always use the hob.

On my YouTube video I have double the amount of the ingredients that I have written in this recipe and that’s because someone pointed out that the amount makes a lot of food. I have a very big family, but I realise most people do not. I have adjusted it accordingly so it makes a smaller amount and I would say this recipe as is would probably feed about 6-8 people.

Chicken biryani is an aromatic, mouth-watering and authentic Indian dish with succulent chicken in layers of fluffy rice and fragrant spices. This chicken recipe is easier than most recipes but retains the authentic. A Pakistani chicken biryani recipe that is filled with vibrant colours and bursting with flavour from the array of spices and herbs. Biryani might seem like a challenging and demanding dish but with this chicken dum biryani recipe you will be able to make the best chicken biryani to please all your guests. It tastes so good that you will be able to serve it up even a few days later. Sure to become a family favourite, this easy chicken biryani is not too spicy and is perfect for a weeknight dinner alongside homemade raita.

I’m Sadia, a 20-and-some year old Muslim aspiring scientist and writer who loves to experiment with cooking, baking and all things food. And here it is: a blog following the ramblings of a 21st century Muslim girl about her never ending love for Islam, cooking and life! 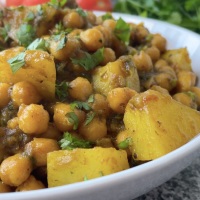